FYI, we are auctioning off a very rare, collectible game on eBay (listing here):

This auction is for the RARE 1904 card game Competition, or Department Store in used but nearly complete condition.

This game has been attributed to Elizabeth Magie by the George Glazer Gallery of New York, sellers of antiquarian globes, maps and prints in New York City.  This would make it her first published game, predating the first commercial version of The Landlord’s Game by two years.

The Landlord’s Game was invented and patented by Lizzie J. Magie (also known as Elizabeth Magie Phillips), a follower of economist Henry George (1839-1897), popularizer of the “Single Tax.”  Her intention was to use her game to keep Henry George’s ideas alive after his death.  His most famous work was the book Progress and Poverty.

This game is of great historical importance, since it is quite possible that The Landlord’s Game was first developed as a card game before it acquired a board.  Thematically, Competition or Department Store is a precursor of her later game Bargain Day (published by Parker Brothers in 1937), which also had a department store shopping theme.

We do know that Elizabeth Magie invented other card games besides this.  In 1910, Parker Brothers published her game Mock Trial, and her final patent, issued in the mod-1920s, was for an educational card game.  This auction also includes an extremely rare Parker Brothers advertising flyer from 1910 that promotes Mock Trial (pictured).

106 cards (should be 107, plus one card that should be glued to the outside of the box)

We will include high quality reproductions of the two missing cards, plus a copy of the game rules.*  The red and white paper discs should be quite easy to supplement, meaning you can actually play this game just as people did 112 years ago.

I do not know of ANY early Monopoly game collector who has even a partial version of this extremely rare game.  This is only the second example I have seen in over 10 years of collecting.  Even the Strong Museum of American Play in Rochester, NY has only a partial set with a lot fewer pieces than this one.

The discs represent play money that makes up a Bank.  Each player becomes their own store, and receives an inventory card plus several letter cards.  These are arranged to form words that represent inventory stock.  There are cards for Checks, a Fire Sale, a Bargain Sale, Bills, a Financial Panic, a Cyclone and a Fire.  There are also cards for Fire Insurance.

The winner is the first player to collect $50.

*Her name is misspelled as “Magee” on the rules. 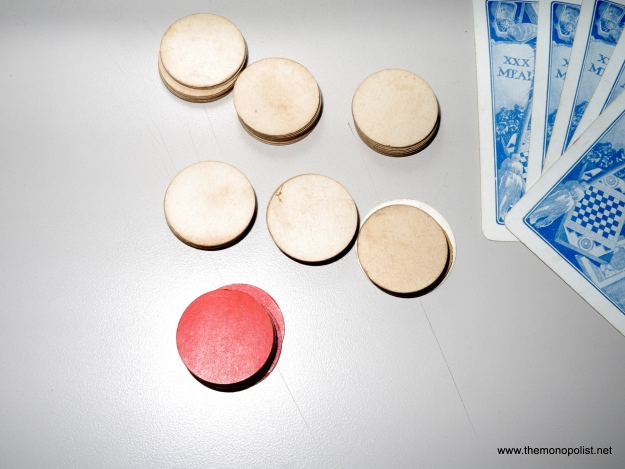 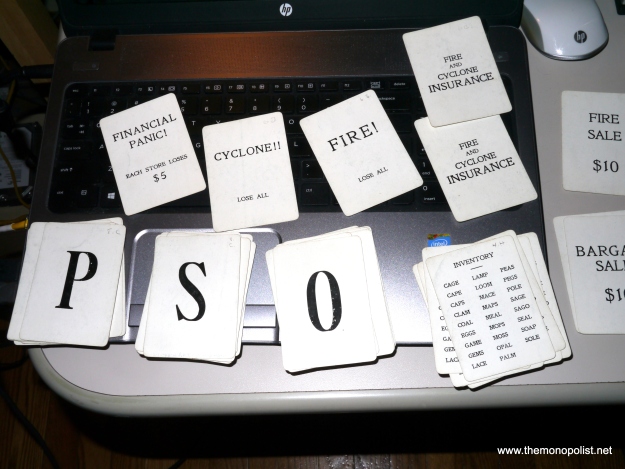 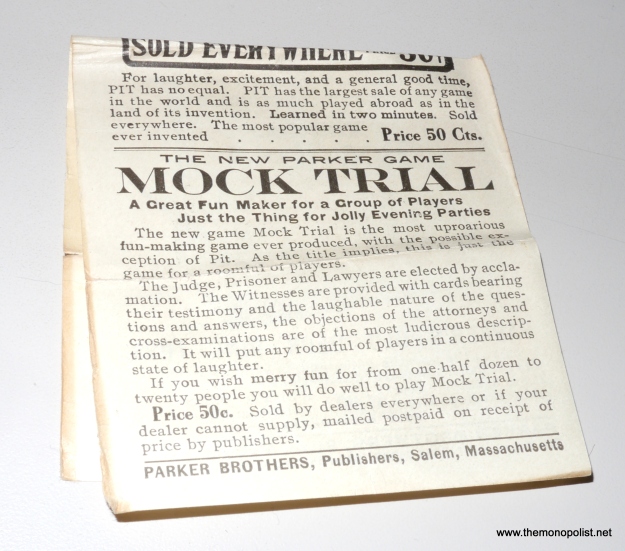