Plastics are a commonplace part of everyday life, but were somewhat exotic in the mid-1930s when Monopoly was first commercialized. This post examines just what those early plastic game pieces were, what they are probably made of, and how they could have been made. What collectors call “composite” Monopoly tokens first appeared in sets in 1936, and may have been introduced due to a shortage of the metal tokens which had been used. They reappeared in Monopoly sets during World War II. Parker Brothers used similar game pieces in other games such as Conflict (1940).

While plastic houses and hotels are used in the least expensive Monopoly sets today, when first introduced, they came in the most expensive sets in both the US and UK in the late 1930s.  Parker Brothers literature referred to these as “Ivoroid.”

In 2008, we corresponded with a historian of early plastics, and what follows was written by Julie P. Robinson, and is taken from that conversation.

Julie Pelletier Robinson, plastic historian, lives in the Adirondack Mountains of upstate New York. She has written and lectured extensively on the subject of early plastics and was involved in the making of the A&E Modern Marvels documentary, “The History of Plastics.” Julie is the co-author of the book Celluloid – A Collector’s Reference and Value Guide. She currently works repairing celluloid toys at her studio in Upper Jay and may be reached by email at: celluloid@frontiernet.net.

As far as the shaped animals and game tokens…. we can rule out the common plastics. They are certainly NOT any of the 19th century plastics: rubber, gutta percha, vulcanite, shellac, casein or celluloid. 20th century plastics that can be ruled out are cellulose acetate, polystyrene, cast phenolics, neoprene, urea formaldehyde, acrylic, polyethylene or any type of vinyl or nylon. They just don’t have the look. Plastics technology was taking off during the Great Depression and there were all sorts of experimental compositions out there. These were the ones that succeeded.

The Embossing Company of Albany was big on using compositions. It was founded by John Wesley Hyatt and his brothers Isaiah and Charles in the 1860s…. while attempting to invent celluloid – they had come up with a bunch of molding compounds and compositions that were successful in making dominos, game pieces, etc. Eventually Hasbro bought them out ( I think… something like 1957 maybe).

The game piece looks to me to be a similar type of composition as a material dubbed Elastolin by the German company Hausser— who made toy soldiers, cowboys and indians, trees and a great assortment of animals out of the material. Elastolin was a combination of sawdust, casein plastic (made from milk solids that were treated with formaldyhyde) and kaolin clay……another type of similar composition was called Lineol.

Also– there is a possibility it was a composition based on synthetic elastic – the first was called Duprene and it was invented by a fellow from DuPont in April 1930 – he had such severe depression he committed suicide before he ever saw his invention marketed. Duprene was later manufactured as Neoprene.

I had considered the idea of a connection with European composite figures a couple years ago. These were frequently models of animals.

I bought one of these off eBay, and found it was much heavier than the Monopoly pieces are. So, whatever they did use to make it was certainly much lighter weight than what the Europeans used.

In addition, it is pretty unlikely that the Monopoly pieces were made in Europe. So even if the same process was used, or a similar one, it was something homegrown and likely done in the Northeastern US.

The other vexing thing is the absence of other period items made of a similar material… or, at least, I haven’t found any yet myself.  Neoprene I remember as the kind of thing shoe soles are made from, a kind of synthetic hard rubber. The Monopoly tokens appear to be brittle, and not flexible, and crack and flake easily.

My guess is the Monopoly tokens were formed by hand using a glob of material and a small press.

It was probably some sort of Casein composition since it was brittle. I have some “clay” tokens – they look like gambling chips of sorts – that have embossed golfers on them and they are blue, red and white….and they are made of some sort of composition also and I’ve never been able to figure it out. God only knows what box THOSE things are in.

Also – I doubt very much that the Germans were making any toys during the war years… trade ceases anyway.

There was the Embossing Company – based in Albany, NY.  It began during the 1860s by John Hyatt – as he was trying to invent a suitable substance for ivory – and he messed with all sorts of compositions… he ended up making several that were suitable for dominos, chess pieces and game pieces…. his brother Charles was put in charge of the business and they were incredibly successful right up until the 1950s when they were absorbed by Hasbro… there is a possibility they might have had something to do with the manufacture of your game tokens.

I never did extensive research on the Embossing Company – but it was the first business that John W. Hyatt, the inventor of celluloid, set up on his quest to invent the material – so it was important in that respect while I was doing research on my book for celluloid. Celluloid was mass produced – and some of that was crude!

They would have a two sided mold – much like a sheet mold for candy – it would have indentations for 30 toys in it, they would lay two sheets of celluloid, close the mold and blow hot air between the plastic and it would soften and fill the cavities, when cooled – out would pop 30 toys… many companies paid great attention to detail and others did not… some of the toys were so lacking in detail I don’t even believe they had inspections! At least in Japan!!

They probably molded more than one token at a time – think of a machine similar to a waffle maker… they probably filled several recessed molds with the composition then lowered the lid and molded them by pressure and heat.

Massachusetts had two centers for plastics – one was Leominster, that thrived on the manufacture and fabrication of Viscoloid—Dupont bought them out in the late 1920s. The other area was Springfield where Monsanto bought out the Fiberloid works. During the years that followed the buyouts of Viscoloid and Fiberloid – all sorts of new plastic materials were developed… the country was in Depression during the 30s but it goes down in history as the Progressive Era in Plastics. No telling what company came up with your base composition for the game pieces, but I’ll betcha they were made in a small operation by jobbers who fabricated the stuff that was supplied by one of these firms.

I google searched the US Patent website on game pieces and game tokens and came up with all sorts of interesting patents from the 1920 – 40s. Lots of fascinating stuff but nothing regarding what you’re looking for. There is a great chance the technique was never patented as it was just a temporary solution. 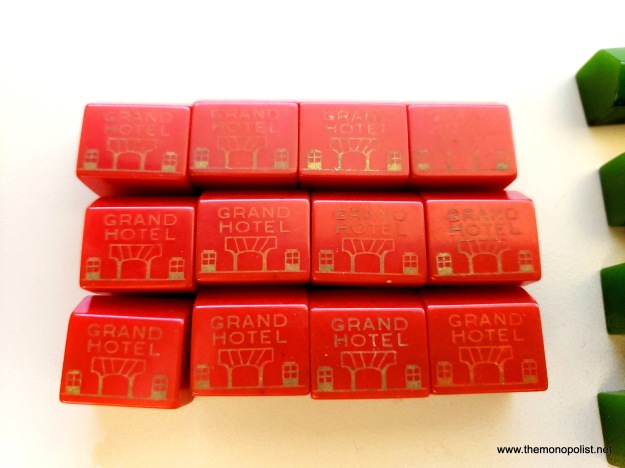 “Grand Hotels,” used in the most expensive US and UK Monopoly sets in the late 1930s.

The first plastic houses used with deluxe US and UK Monopoly sets in the late 1930s.

This plastic house has deteriorated somewhat.

Well Ivoroid was indeed a cellulosic plastic – but trademarked so in England by Daniel Spill during the late 1800s- nobody in the US – to my knowledge – used that trade name for their brand of celluloid… you’ve got Fiberloid, Pyralin, Zylonite, Viscoloid and Celluloid.

They were the major heavy hitters. Here’s a hint…if they are made from molded celluloid they will have a seam someplace… and they would be hollow – not solid.

The houses look to be sliced from a uniform block of shaped cast resin. And it is true that the colors of radio cases changed– due to exposure to UV light…. but it only effects the surface–
underneath all that discoloration is the original color. I sanded the handle of a pie server that was butterscotch colored and it was beautiful ivory white…and one of the old radio guys I talked with told me that the color can be revealed on old cases by sanding with a very high grit paper… but it’s a lot of work. If these game pieces were kept in the box, then perhaps they were spared the exposure to UV light. I would suggest you test one by exposing it to hot water from the tap– and take a whiff of the scent. It will probably smell strongly of carbolic acid and formaldehyde. The only exception is urea formaldehyde– that does not seem to discolor… and sometimes it looks a bit waxy in appearance.

I wonder if there is any place that keeps a record of trade names…. hmmm – perhaps the name Ivoroid was resurrected… much like the name Lucite. Originally Lucite was introduced in the late 20s by DuPont as a trade name for their best quality celluloid plastic…then they retired it until 1936 and reassigned it to Acrylic!